Let’s be completely honest, we all knew it was going to happen. You start a new blog (maybe you’ve even built the engine yourself), add some enthusiastic new posts, start publishing fairly regularly… And then at some point you start procrastinating a bit, telling yourself that next weekend you are going to write about this new thing you’ve found and without knowing it has been eight months since your last post.

Well, in my defence I have to say it has been a pretty busy year. Last March I started working full time for the Open Knowledge Foundation. The OKF is a not-for-profit devoted to promoting open access to knowledge and data, and it is involved in a ridiculous amount of awesome projects. Check for instance the annotated works of Shakespeare, OpenSpending, an effort to structure and visualize government budget spending, and one of my favourites, the Public Domain Review. You can find more active projects and mailing lists on the OKF website, and if you want to meet brilliant and talented people do not hesitate to get involved!

One of the main projects of the OKF, and the one I work full-time on, is CKAN, an open source data catalog platform. The aim of CKAN is to provide a robust and flexible platform for publishing, discovering and sharing data. It powers institutional catalogs like the British and Norwegian government open data catalogs, as well as community instances like The Data Hub or the ones maintained in different countries.

The first project I was involved with was the UK Location Programme. It is integrated with the mentioned Data.gov.uk (DGU), and it acts as the spatial data infrastucture for supporting the pan-european INSPIRE directive. A lot of work on this front was related with harvesting multiple CSW servers to aggregate their records in the DGU portal. 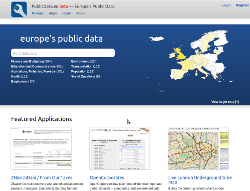 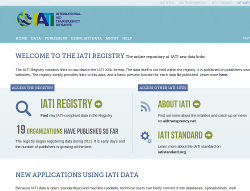 Another really interesting OKF project I worked on was [Publicdata.eu](http://publicdata.eu), an experimental portal that aggregated open datasets from catalogs across Europe. My colleague Friedrich Lindenberg wrote a [nice post](http://ckan.org/2011/06/23/publicdata-eu-data-apps-and-800000-triples/) presenting it, if you want to know more about it. I was even able to squeeze a couple of [maps](http://publicdata.eu/map) in there!

One of the projects I’ve been more involved recently is the IATI Registry, also powered by CKAN. IATI is an international initiative to promote transparency on aid spending. It provides a common standard on which funding organisations can publish their activities, allowing stakeholders and third-parties to analyze and visualize this spending data. The registry provides a centralized point where organisations can publish their IATI compliant files so users can access them via the web interface or the API.

And of course, apart from working on specific projects I’ve been involved in the usual day to day tasks in a big open source project like CKAN, building features, fixing bugs, supporting users… All of this with a brilliant (remote) team and learning an awful lot of stuff on the way!

So all in all, 2011 has been an intense and exciting year and it looks like 2012 won’t dissapoint either, with new projects and features coming up.

Hopefully it won’t take me months to tell you about them.